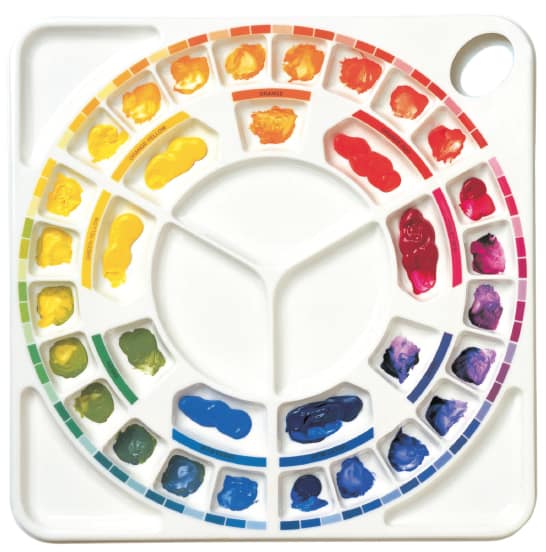 Whenever I give a demonstration of colour mixing I ask my audience where they experience the main difficulty. The answer is invariably the same – mixing greens. This is because we are very sensitive to green visually and also require a tremendous range for most types of work, from landscape painting to botanical illustration.

The way that we have been working, using the now-outdated Three Primary System, has made it almost impossible to mix the greens that we actually want – quickly, accurately and without waste.

Because of the difficulties most artists experience, the common approach is to rely on mixing various blues and yellows on a trial and error basis or, worse still, to purchase some of the ready made greens which may spoil your work as they fade or darken. It need not be like this as it is very easy to mix a vast range of predictable greens.

Before we start, I would ask you to accept the following

Pure blue and pure yellow do not exist, we do not even know what they look like. A varying amount of green is reflected by every blue and every yellow. Some reflect a lot, others a little. When we mix any blue and yellow, the blueness and yellowness, as such, disappear, leaving behind the green that they contained.

Let’s put this to the test, for the first mix I wish to produce a dull, dark green. I will start with a blue which is a poor ‘carrier’ of green, Ultramarine Blue. Ultramarine Blue reflects only a tiny amount of green. I will put this small amount of green onto the palette, you will notice that I am nor calling it blue, I am not interested in the fact that at the moment it looks blue, because the ‘blueness’ will disappear as soon as I add the yellow.

As I blend the two together the blueness and the yellowness disappear – leaving behind two small amounts of green. As only small amounts of green are left, the colour in the center of the range has to be a dark green. Both the blue and the yellow are placed into mixing wells which point away from the green position, indicating that the result will be a dark, dull green.

In every case, by mixing one good carrier and one poor, I will end up with mid greens in the center of the range. One arrow shaped mixing well (the yellow) points towards the green position, the other, the blue, points away from it, indicating that the result will be a mid-intensity green. To increase the amount of green, to produce a mid intensity green, I have to select at least one good carrier of green. For this I will use the large amount of green in the Hansa Yellow and add to it the small amount of green in the Ultramarine Blue.

Let’s try a different combination for another type of mid intensity green. This time I will go back to the Cadmium Yellow Light, the poor carrier of green used in the first mix, but will change the blue to Cerulean Blue, a good carrier of green. Another range of mid intensity greens will emerge, slightly different from the last due to the nature of the pigments, but still mid greens, neither bright nor dark. Again, one arrow shaped mixing well points towards the green position and the other away from it, indicating the mid intensity green which will result.

For bright greens, I need only to decide where the green is going to come from. When I mix two good carriers of green such as Cerulean Blue and Hansa Yellow, it does not matter that the blue and yellow, as such, will disappear, because they both leave behind large amounts of green. This is why the colour is brighter than the previous mixes. When using the mixing palette, if both the blue and the yellow point away from the green position the mix will be a dark green, if one is away and the other towards, it will be a ‘mid’ green. If both point towards, as in this case, the green will be relatively bright.

Even brighter greens as Phthalocyanine Blue is introduced

For a brighter green still, I need to look around for even better carriers. Although Cerulean Blue is a definite ‘blue green’ and a good carrier of that colour, Phthalocyanine Blue is an even better carrier. When I now mix Phthalocyanine Blue with the Hansa Yellow, the resulting greens will be even brighter, as the blue introduces even more green to the mix. Can you see that it is not a case of blue and yellow making green, but of the different blues and yellows which are available to us ‘carrying’ varying amounts of green?

It is the green which is left behind which gives the final colour.

For those of you who have not read my book ‘Blue and Yellow Don’t Make Green‘, this might seem like a rather unusual approach. But I can assure you, it is very easy to learn and you can gain complete control of colour mixing – not just of greens – in a very short time.

Place the Phthalocyanine Blue in the same mixing well that the Cerulean Blue would otherwise be in. Both are green-blues but this one reflects even more green.

Please Note: You are shopping on the School of Colour Europe website. Shipping to EUROPE only. Dismiss